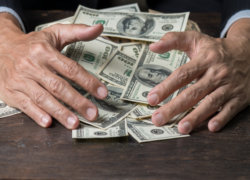 Idols of the Heart: Roadblocks in the Path of Victory

“I am the Lord your God, who brought you out of the Land of Egypt, out of the house of bondage. You shall have no other gods before Me.” – Exodus 20:2-3

There is probably nothing more frustrating than being in our car, intent on reaching a predetermined destination at a prescribed moment of time, when rounding a corner we come face to face with a big orange sign that says “Road Closed” with an arrow pointing to a detour. The last thing that we want to do is alter our course and take a different route than we had anticipated, and yet it appears that we have no choice.

For the person coming out of a life-dominating sin, however, there is a choice. It is a choice to overcome the issues that have held us captive, like bars on a prison, to a life doomed to failure. And the roadblocks that I speak of are known as “idols of the heart.”

The Lord Jesus Christ, when asked by the religious leaders of His day, “What is the greatest command,” stated emphatically “You shall love the Lord your God with all your heart, with all your soul, and with all your mind” (Matthew 22:37).

And with all due respect, that is what most of us set out to do as new believers. The question that needs to be asked is, “How well do we succeed?”

For many people this is an important question. For the person seeking victory over life-dominating sin, it can mean life or death in this world in which we presently live. It is often for this reason that the motivation for pulling down the idols in our heart becomes a necessity rather than an option. Add to this fact that, as we grow in our relationship with our Father God, the idols in our life become more and more apparent. God will even frustrate us to the point that we drop our idols or He will remove them physically from our grasp. It is the desire of His heart that we have no other gods before Him. So as He promises in His Word to complete the good work that He began in us, this becomes part of the process.

Having established our intention to grow in our relationship with God by ridding ourselves from the love of our idols, we need to identify them. An idol is define by Webster’s Dictionary as: Anything on which we set our affections; that to which we indulge an excessive and sinful attachment.

An idol is anything which usurps the place of God in the hearts of His rational creatures.

Since we live in a very materialistic culture, idols often take the form of things such as cars and houses, or jobs that enable us to obtain those things. The things or the endeavor to obtain them is not wrong, but rather the pursuit of satisfaction or wholeness that we expect will result from them.

The craftsman stretches our his rule, He marks one out with chalk; He fashions it with a plane, He marks it out with a compass, And makes it like the figure of a man, that it may remain in the house. He cuts down cedars for himself, And takes the cypress and the oak; He secures it for himself among the trees of the forest. He plants a pine, and the rain nourishes it. Then it shall be for a man to burn, For he will take some of it and warm himself; Yes, he kindles it and bakes bread; Indeed he makes a god and worships it; He makes a carved image, and falls down to it. He burns half of it in the fire; with this half he eats meat; He roasts a roast, and is satisfied. He even warms himself and says, “Ah! I am warm, I have seen the fire.” And the rest of it he makes into a god, His carved image. He falls down before it and worships it, Prays to it and says, “Deliver me, for you are my god!” – Isaiah 33:13-17 NKJV

Our intention may not be deliberately intended to offend God but our efforts to enter into an intimate relationship with Christ are impeded. For the person struggling to free himself from life-dominating sin this is crucial.

We must remember that an idol is not necessarily something bad but can be something good that is placed in a position above God.

Now great multitudes went with Him. And He turned and said to them, “If anyone comes to me and does not hate his father and mother, wife and children, brothers and sisters, yes, and his own life also, he cannot be My disciple. And whoever does not bear his cross and come after Me cannot be My disciple. For which of you, intending to build a tower, does not sit down first and count the cost, whether he has enough to finish it – lest, after he has laid the foundation, and is not able to finish, all who see it begin to mock him, saying, “This man began to build and was not able to finish.’ Or what kind, going to make war against another kind, does not sit down first and consider whether he is able with then thousand to meet him who comes against him with twenty thousand? Or else, while the other is still a great way off, he sends a delegation and asks conditions of peace. So likewise, whoever of you does not forsake all that he has cannot be My disciple.” – Luke 14:25-33

Jesus was not saying that He wouldn’t permit the follower that doesn’t favor Him above all else to be His disciple. He is saying it wouldn’t work! In the Bible it is stated that those who sow in tears would reap in joy. The reason for them sowing in tears is that they couldn’t feed their hungry families with the grain that they were putting in the ground.

The sacrifice preceded the harvest. In the same way, if we expect to harvest the blessing of victorious Christian living, we must put aside some of the things that we cling to now and desire more of God Himself.

So I ask you the question, “What is it that you could absolutely not consider living without? Is it a drug or a drink? Is it a person or possession? Is it a career or a business?”

Therefore concerning the eating of things offered to idols, we know that an idol is nothing in the world, and that there is no other God but one. For even if there are so-called gods, whether in heaven or on earth (as there are many gods and many lords), yet for us there is one God, the Father, of whom are all things, and we for Him; and one Lord Jesus Christ, through whom are all things, and through whom we live.” – 1 Corinthians 8:4-6

When we realize that the only true satisfaction in this life, the only thing that fills the void in our innermost being, and the purpose that makes our life worth living is Jesus Christ, we will find that there is no other god like our God. The former addict will be set free from anything that once held him captive and he shall be free indeed.

They wandered in the wilderness in a desolate way; They found no city to dwell in. Hungry and thirsty, their soul fainted in them. Then they cried out to the LORD in their trouble, And He delivered them out of their distresses. And He led them forth by the right way, That they might go to a city for a dwelling place. Oh, that men would give thanks to the Lord for His goodness, and for His wonderful works to the children of men! For He satisfies the longing soul, and fills the hungry soul with goodness.” – Psalm 107:4-9

All scripture is from the English Standard Version of the Bible unless otherwise noted.

Intoxicated with Babylon By Steve Gallagher

For more help on this topic or for information on the multi-faceted ministry of America’s Keswick, call 800.453.7942