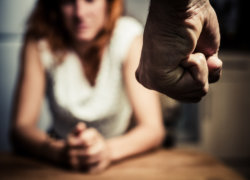 Abuse is wrong! Allowing someone to abuse you is wrong! Failure to help an abused person is wrong!

“Husbands, love your wives and do not be bitter toward them.” – Colossians 3:19

“He who is slow to wrath has great understanding, but he who is impulsive exalts folly.” – Proverbs 14:29

“Or do you not know that your body is the temple of the Holy Spirit who is in you, whom you have from God, and you are not your own? For you were bought at a price; therefore glorify God in your body and in your spirit, which are God’s.” – 1 Corinthians 6:19-20

“Husbands, love your wives, just as Christ also loved the church and gave Himself for her, that He might sanctify and cleanse her with the washing of water by the Word, that He might present her to Himself a glorious church, not having spot or wrinkle or any such thing, but that she should be holy and without blemish. So husbands ought to love their own wives as their own bodies; he who loves his wife loves himself. For no one ever hated his own flesh, but nourishes and cherishes it, just as the Lord does the church.” – Ephesians 5:25-29

“Husbands, likewise, dwell with them with understanding, giving honor to the wife, as to the weaker vessel, and as being heirs together of the grace of life, that your prayers may not be hindered.”– 1 Peter 3:7

“Deliver those who are drawn toward death, and hold back those stumbling to the slaughter.”– Proverbs 24:11

“Remember the prisoners as if chained with them – those who are mistreated – since you yourselves are in the body also.” – Hebrews 3:13

Grow Up, Stand Up, Step Up

I don’t know about you, but I am tired of reading headlines and hearing news stories about women and children being abused, raped, and killed at the hands of their abusive loved ones. As tired as I may be, the truth is we live in a sin-filled, sinner-filled world, and until Jesus returns, bad things are going to happen.

Therefore, we who are called by His name are called to grow up, stand up, step up, pay attention, and require more of ourselves on behalf of those who are weaker, in trouble, in pain, and who are being violated and sinned against – verbally, physically, or sexually.

For the sake of the hurting we need to understand and accept the truth: the fact that all abuse is anti-Christ. It does not matter if it’s verbal, emotional, physical, or sexual – all of it is wrong and I pray that after you read this small publication, you are a step closer to saying

“Yes, Lord, yes! I am willing to stand in the gap on behalf of anyone that I know who is being abused.”

I implore us to care more about the one who is being suppressed and oppressed no matter what it takes.

In fact, let’s consider the bigger picture of reconciliation and redemption. It is because of this story, the one that brought salvation and deliverance for so many of us, that we have within us the ability to help the helpless.

Let’s be intentional to live the Gospel, NO MATTER WHAT!!!

Every four hours in America there is a woman killed by her husband or partner. Every year in America, more than 3100 women are killed – and most of those at the hands of a loved one.

So, before you read any further, let’s define abuse.

What you need to know first is that when you say “no” it means “no!” When you say “no” it should be the end of the discussion and not the beginning of a negotiation. Second, it is not your fault that you are being abused, and you did not make the abuse happen. Lastly, there is help for you! It’s going to take courage that you may not know or believe you have, and you are going to need help and a plan to get out of that situation. One resource is: www.thehotline.org

One final though for the woman, young or old, who is in a relationship and things are not as they ought to be. I have a few things to say to you:

Gavin De Becker discussing his book, The Gift of Fear, on a talk show

Gavin De Becker discussing his book, The Gift of Fear, on a talk show

All scripture is from the New King James Version of the Bible unless otherwise noted.

For more help on this topic or for information on the multi-faceted ministry of America’s Keswick, call 800.453.7942