A Life in Progress – Josh H. 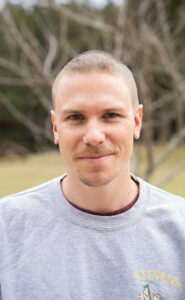 Before I knew Christ, my life was a never-ending search for acceptance and fulfillment. I tried everything but nothing worked for long. My mom and dad split when I was very young, and my mom remarried. My stepdad was not a nice man. To deal with his constant rejection, I turned to books. I was a voracious reader.

As I got older and angrier, I began self-harming. Eventually I learned about drugs and alcohol and became fascinated before I even tried either. I looked each one up in encyclopedias, reading about their effects, and looked forward to the day I would try them. Around age 12, I discovered my parents liquor cabinet. I hated the taste and couldn’t really stomach enough to get drunk but kept trying. The first time I forced down a half bottle of Scotch I got sick. I decided to leave booze alone after that.

When I reached high school, drugs became available to me. I had my first OD at 16. When I woke up in the hospital they asked if it was on purpose or accidental. Thinking I’d be in less trouble if I said it was intentional, I ended up in the psych ward. Surprisingly, I enjoyed being in the hospital because it got me away from my stepdad, so when I got home I began self-harming more, hoping I’d be sent back. My stepdad and mom eventually decided it might be best for me to live with my dad, which only depended my depression. I attempted suicide after the move, and went to harder drugs. Shortly after graduating, I was introduced to IV cocaine and heroin. I ended up in the hospital for maybe the 7th time. While there I met a women who introduced me to my next addiction: toxic, co-dependent relationships.

I was in a couple of relationships that were almost identical. I finally decided I’d rather be homeless that deal with the violence and threats that were part of my relationship, and I no longer felt safe living there. I wandered for days with nowhere to go. In desperation I called my brother to help me get a hotel room. I tried to kick the drugs there on my own, but couldn’t.

My father found a detox for me, but I ended up using while there and left after 2 weeks to begin the cycle all over. I wanted to be dead, but was afraid of dying.

I spent a lot of time online, mostly on boards related to alcoholism. I posted something on one and someone messaged me that I didn’t need alcohol, meditation or anything but the love of Jesus. My mom had been telling me about Keswick for a couple years. I headed back to detox with my Colony application in hand and began filling it out immediately.

Before the Colony I was a paranoid, hopeless wreck. Now, knowing the depth and intensity of  God’s love and the power of His Spirit, I have a joy and peace I can hardly put into words. There’s a confidence that everything is going to be OK since His Word tells me the battled has already been won.  My mom frequently quoted Jeremiah 29:11-13 to me, and those have become my life verses.

“For I know the plans I have for you,” declares the Lord, “plans to prosper you and not to harm you, plans to give you hope and a future.  Then you will call on me and come and pray to me, and I will listen to you. You will seek me and find me when you seek me with all your heart.”

Josh is now serving with the New Hope Philly organization.